The image from 1968 in black and white was taken with a Nikon F using Tri-X and an 85mm mild portrait lense.  I was then 22 and a summer photographic intern on the Louisville, KY Courier-Journal, regularly then winning Pulitzer prizes in reporting and photography and ranking amongst the top ten newspapers in the country as rated by the Columbia School of Journalism .  I'd been given a real gift, the assignment to do a photo essay of the riverfront business area, which included the old Haymarket district, the real gritty run-down commercial market for farm produce.  Such markets are long gone now, but before the mid-1900s every city had them, and they weren't all that different from their bazaar and souk counterparts in Europe and points east.

Taking pictures to capture the life and spirit of a person takes balls: you really have to be right on top of them so that they fill the camera with their life.  I didn't know that, but I was about to find out.  A hefty fireplug of a woman was setting up her stall, right behind me, and someone had called her a wino.  She snapped around with fire in her eye and roasted the fellow that had said that...and a third person, right at my side, said, 'Turn around, take her picture'.  I was flustered both by him and the woman's ire, but he insisted, so I turned around, right on top of the woman...and took this shot more or less blind, on reflexes.  When the intensity of the moment is strong enough, it's like a rushing blaze and you really don't know what you're doing, you just run on reflexes.  And that was my first great portrait shot, with it and the lesson (Get Up Close and Fill. The. Frame.), a gift from the guy who insisted I Take The Picture.

The other image was one of my first with my first good digital camera, the Canon 5DMkII.  It has autofocus that works pretty well (no small thing), high resolution (for a digital camera) and great lenses. This image was shot with that same focal length, an 85mm mild portrait telephoto, but it works beautifully in low light (I never use flash) with an ultra bright F1.2 opening.  I am standing in total darkness and shooting two women, also in the darkness outside, but lit by light spilling from inside....and the result is gorgeous lighting like Vermeer.  Even so, I must slow the shutter speed down a lot to get enough light and so the image is slightly blurred. 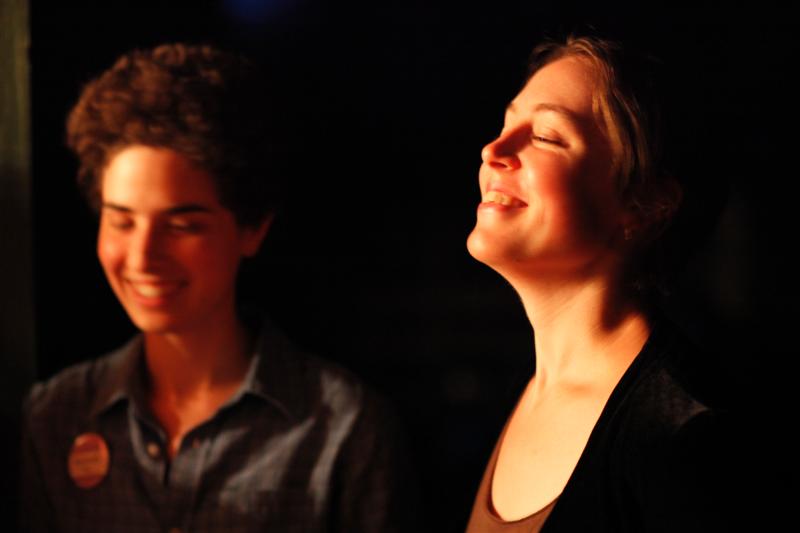